Wild or domesticated, deer are a fascinating part of the New Zealand food-chain fabric. 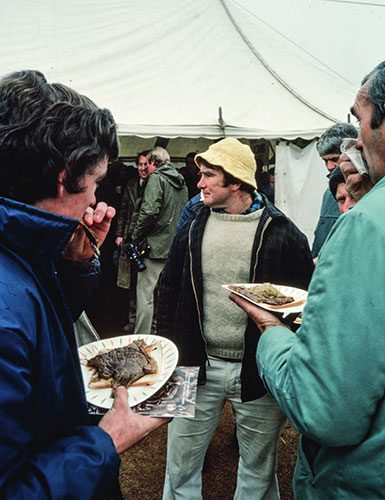 In the 1970s, deer farming was in its infancy and not for the faint-hearted. Those involved were a hardy lot, diving fearlessly out of hovering helicopters to tackle wild beasts, once considered pests, for transport to the farm. When the lean, mean commodity suddenly soared in price, a ‘venison rush’ sparked the ‘deer wars’. It was all on. Government forces struggled to snuff out illegal raids into national parks. There was sabotage, arson and fisticuffs at dawn. Most of the venison headed to lucrative European markets, but here it was devoured unceremoniously on a slice of Tip Top white, slathered with Wattie’s and served on a paper plate – a bloody beaut feed for a good keen man. This photo may not have been part of Brake’s best-selling book New Zealand, Gift of the Sea, which some have called “a love letter” to the country of his birth – but it has that same soul. It references a time before the domesticated deer and a venison-export industry now worth in the region of $170 million to the economy. 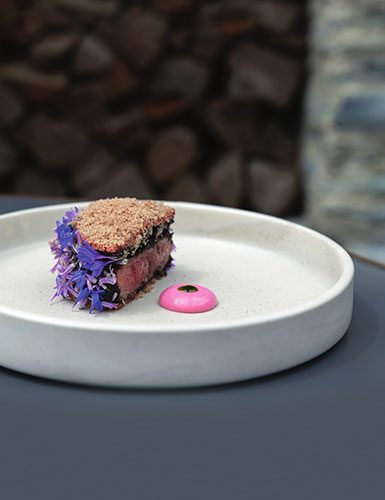 Before he checks in for his shift, Amisfield executive chef Vaughan Mabee loves to stride out into the Central Otago hills on an early- morning hunt with his dogs, the tussock crisp with frost “like walking on biscuits”. Hunting is in his history, his here-and-now and his future. Since his inception at the restaurant six years ago, the menu has morphed into a game-on affair, where wild rather than farmed animals are used, balanced by a comprehensive fish and vegetarian offering. The Amisfield game sandwich is Vaughan’s spin on the tucker he shared with his hunting buddies: sammies made over an open fire in the back blocks, with meat cut fresh from the hung beast slapped between two slices of soft white bread. “In fact, most of my favourite childhood flavours are wrapped inside Tip Top,” he says. This version, served rare – always – is dry-aged venison crusted in harakeke seeds, in a kūmara-bread sandwich. It’s sprinkled with bresaola candyfloss, decorated with foraged flowers and presented alongside a pickled blueberry and pinot noir mayo. It’s flash – but its heart’s in the right place. “When you taste meat from an animal that has lived in the wild, you taste freedom,” says Vaughan. ■ CLAIRE McCALL