MARTIN BOSLEY CONTINUES OUR SERIES WITH HIS FAVOURITE DISH FROM ANOTHER NOTABLE NEW ZEALAND RESTAURANT. 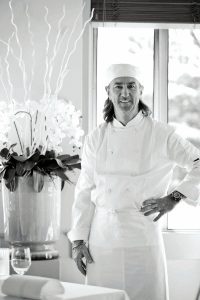 Charley Noble, Wellington.Chef Paul Hoather has always been a master at turning great produce into something memorable, and for 20 years he had the fabulous White House restaurant on Oriental Parade, serving some of the city’s most innovative food. Then the global financial crisis hit and the corporates started sending out memos saying a sandwich at your desk was a more productive use of your time, and business began to drop away.

Sensing that fine dining was on the way out, Hoather wanted to do something more casual and fun for his guests, something that reflected the new mood for dining. Noting the lack of a decent steakhouse in Wellington, he and business partner Pengyu Du opened Charley Noble in 2013, originally intending it to be their ‘second’ restaurant. A little more than two years ago, Paul suffered a stroke that could have killed him. The White House was closed and Paul stepped out of the kitchens, moved to Nelson and now consults regularly with executive chef Phillip Dorr regarding the menu.

As you approach the Huddart Parker building on Wellington’s Post Office Square, you can smell the restaurant from the street. It starts as a distant lust, a primal desire that intensifies the instant you open the heavy front door: smoke. Clean, fruity, seductive and thermal, it permeates everything it touches. The buzz in the dining room that greets you comes from people content that they have found their way to the right place and reassures you that you are among friends.

While lunchtimes are filled with city workers – who obviously didn’t get the memo about the sandwiches – it’s a big-city eatery that’s jandal-friendly; a steakhouse that has passed through Sydney, New York or London to get here. It’s a polished, grown- up, accessible, impeccably comfortable and well-run operation. There is a handsome raw bar at which to perch in front of the open kitchen and watch chefs shuck oysters to order. With soaring ceilings, heavy columns, bronze-framed windows and banquette booths running the length of the room, it is unquestionably impressive. The wine list has gravity – recognised as three-time winners of the Best Drinks List award in the Cuisine Good Food Awards – and the service staffs know their stuff.

The menu is big and at the beating heart of it are the wood-fired grills. A clever menu structure works across both lunch and dinner for grazers and big-night-outers alike. The cooking is built around showcasing the produce; it’s sympathetic yet informed, contemporary rather than innovative. They take their wood-fired grilling seriously, using adjustable racks to layer heat intensity, and a combination of mānuka and apple woods to bring out the best flavours, adding smoke and scorch, contributing a rich, deep savouriness to ingredients.

The meat is special; Charley Noble has a next-level intensity about its beef, sourcing it from different suppliers and insisting that it’s aged for a minimum of 21 days to intensify the flavour. But it’s not just a steakhouse meat fest: seafood and fish speak of briny depths; vegetables are not merely side dishes but features in themselves. Iceberg lettuce crunches as it is meant to and is given careful treatment with a buttermilk dressing. I remain utterly powerless in the face of their French- style peas, cooked with bacon, white wine and cream – it’s usually the first thing I order from the menu.

The 500g dry-aged Angus rib-eye on the bone is quite possibly the best steak I have ever eaten in any restaurant. It’s char-grilled to thrilling shades of rust brown, cooked medium-rare, with some carbon-crunchy crust from the aromatic wood grill. Cut from the bone, the meat is firm to the bite with  ripe, juicy minerality and a persistent beefy flavour; the fat has a crispness that crunches then melts in the mouth. Deeply flavoured, it needs little more than a squeeze from a lemon cheek, though it comes with a choice of various sauces and condiments; peppercorn and brandy, a tarragon-laden Béarnaise and an encouraging Café de Paris butter.

When that lust is upon you, this is the steak you wish for but so rarely get.