Much of what we write about on these beautiful pages comes from people who view the world food first. In May,  we started a regular column called ‘One to Watch’ written by  Matthew Patrick, a young new food writer with a voracious appetite for finding the as yet unknown chefs that should be on our radar. It’s our commitment to showcasing some of the talented young people that are climbing the culinary ladder in New Zealand and showing great promise. Our July spotlight was on Abhijit Dey, the sous chef at Harbour Society at SO/Auckland, who recently had a win at the Pacific Region semi-final of the S. Pellegrino Young Chef Competition in Australia. Imagine my delight to be invited to Sydney to cheer on the New Zealand finalists in this extraordinary competition. Abhijit and his mentor, executive chef Marc De Passorio from SO/Auckland, were joined by Giada Grilli, chef de partie at Lillius Restaurant, Auckland with her mentor chef Micheal Meredith and Andrew Tranter, sous chef at Pescatore, Christchurch, working with mentor chef Ryan Henley.

The competition room at the Sydney Seafood School was filled with an impressive array of some of the most talented young chefs in the Pacific region, ready to produce what they hoped would be an outstanding display of their culinary prowess under the watchful eyes and skilled palates of heavyweight judges Peter Gilmore, Christine Manfield, Danielle Alvarez, Dan Hunter and Jock Zonfrillo. It was heartening to see the inclusion of three female chefs for the first time in this Pacific region semi-final. Hitting the pans along with our girl Giada Grilli, were Aram Yun, sous chef at Naum, Melbourne and Kezia Kristel, chef de partie from Icebergs Restaurant and Bar, Sydney. 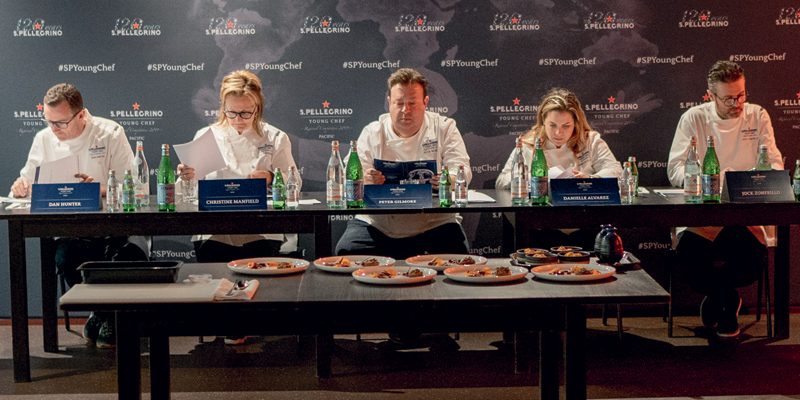 I felt like the worst kind of frazzled stage mother as I watched our three bright young NZ chefs working with their mentors to dish up their heart and soul onto those plates. The challenge didn’t stop there: once each chef had achieved the perfect plate they then presented their dish to the somewhat intimidating (although they are all, in fact, really approachable) judges and were asked to tell its story. S. Pellegrino must be applauded for being the driving force behind this event. The company throws a huge amount of their considerable brand weight towards the support of the global hospitality industry and also sponsors the prestigious World’s 50 Best restaurant awards. Tony Muratore, S. Pellegrino On Premise Channel Manager Asia Pacific, told me the S. Pellegrino Young Chef competition reflects their belief in, and support of, the transformative power of gastronomy. “For us, this is a way of giving back, we need to secure our future (in food) and this is the next generation of chefs that are up and coming. It’s exciting times.”

Auckland chef Abhijit Dey brought home the Fine Dining Lovers Food For Thought Award, given to the young chef who best represents their personal belief within their dish, with his horopito cured wild venison cooked over kanuka wood. Victorian chef James Bond-Kennedy received the Acqua Panna Award for Connection in Gastronomy for his creation using Great Ocean duck and its seasonal feed and Sydney chef Kezia Kristel took out the S.Pellegrino Award for Social Responsibility with a gorgeous dish melding mushroom flavours and a savoury carrot tart. Top gong went to 26-year-old Jose Lorenzo Morales, commis chef at Lûmé in Melbourne, who won the judges over with his signature roasted lechón pork belly dish ‘Analogy’.

Our huge congratulations to all of these spectacular young chefs, who will travel to Milan to compete at the S.Pellegrino Young Chef Grand Finale in Milan in 2020. I have everything crossed so hard that my circulation is in danger of stopping completely… 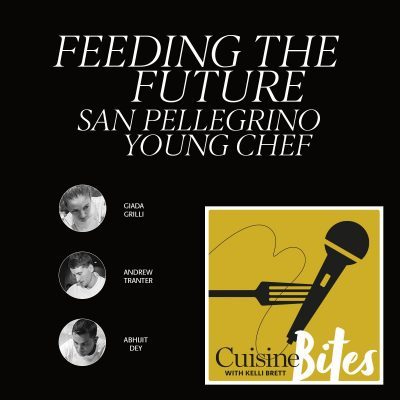