What a time to be a beer lover in New Zealand. We’ve never had it better. One day we might even look back on these times as halcyon days, with the range, availability and quality of craft beer at an all-time high. There is a growing number of new breweries eager to put their own stamp on one of the world’s oldest beverages, and a strong set of maturing craft breweries bringing depth and experience to the industry.

As we come into our seventh year at Garage Project and start to mature a little ourselves, it was refreshing and exciting to collaborate earlier this year with a German brewery who are also celebrating their seventh anniversary. Seven generations of family ownership, that is.

The exhilarating aspect of modern brewing in New Zealand is that our traditions are not something we are particularly tied to. Our brews of old are best left in the past, which leaves us free to explore and experiment with a blank slate. Our German friends however have no such freedom, with rich brewing histories of which they are rightly proud, but constrained by laws forbidding the use of any adjuncts or ingredients other than the base water, malt, hops and yeast.

When it came time to brew together, the message was clear. Please let us break all the rules! And break them we did, creating Verbotene Früchte (The Forbidden Fruit), a liquid homage to the Schwarzwälder Kirschtorte.  Sinfully decadent and, by our Euro- brewing compatriots’ enthusiastic  count, a beer that committed at least seven brewing sins per their laws. There’s that number seven again.

This is not a beer, at least according to the German rules, but remember, rules were meant to be broken.

Here’s a selection of new young breweries to keep an eye out for that are working hard to break a few rules of their own and add to our new brewing tradition in New Zealand.

A young team in Dunedin, headed up by ex-Emerson’s brewer Brendan Bransgrove. New New New Corporation are producing a steady stream of interesting, experimental beers out of a beautiful old stables in the southern end of the city. newnewnew.nz

An exotic Thai lime and lemongrass sour for a tart new-world take on an almost forgotten style.

Young at heart but utterly committed to the history and traditions of Belgian beers, Craftwork are uncompromising in their approach producing extremely small runs of beautiful beers in Oamaru. craftworkbrewery.co.nz

A lovely modern interpretation of a French farmhouse classic, with Michael and Lee-Ann’s love for their product shining through. Brewed with citrus zest, this beer always pours with a lovely thick cloud-like head and is a good one to share.

When we started out we were tiny. But what we lacked in size we more than made up for in agility. A few years have passed but we’ve grown. But whether were brewing 50 liters or several thousand, we’re still here to take some risks, to have a bit of fun and try something new garageproject.co.nz

Working from a heavily refurbished Terry McCashin’s brew system, Ground Up are dedicated to their craft, having started with a 100-litre system. Every drop is produced with significant effort and you can taste brewer Oli Boyes’ commitment to his craft. groundup.co.nz

PUNKS IN THE GYM

A riot of colour and flavour, showcasing the pick of the New Zealand hop harvest. A true showcase of why our hops are some of the most sought-after in the world.

Based out of the Hawke’s Bay, the Brave Brewing Co make consistently excellent beers billed as ‘fresh & local’ – and having had the pleasure of tasting them throughout the year, brewer Matt Smith is doing an excellent job. bravebrewing.co.nz

Brewed with a mix of American hops for their zesty and fruity aromas. 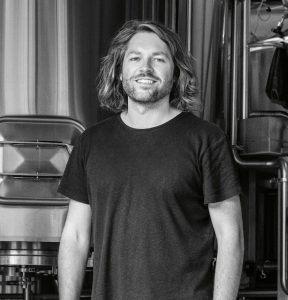