In theory, this recipe is simple enough, but you can see why it is often left to restaurants – once you have bought and cured your expensive piece of beef fillet, it isn’t easy to cut into wafer-thin slices without it looking like you took a chainsaw to it. You can avoid this either by briefly freezing the meat, wrapped in cling film, for about 30 minutes before slicing it, or taking it straight from the fridge, cutting slices the thickness of a one-dollar coin and then batting the meat out between two sheets of cling film.

Coriander is the second most commonly used botanical after juniper in the world of gin, although its contribution is usually nuanced. Try adding a few coriander sprigs along with a chunk of cucumber to your next gin and tonic.

QUINOA & PEA SHOOTS
The secret to great quinoa is to use twice as much water as there is quinoa.

TURNIP & RADISH CONFIT
This isn’t strictly a confit, but ‘boiled turnips’ doesn’t sound anywhere near as nice. Tokyo turnips have none of the sharp, bitter bite found in their larger cousins.

Fritters such as these are a great way to use up any leftover quinoa. They have a dense texture but the rich nuttiness of the grain comes through. I have made these gluten free, but use plain flour or rice flour if you prefer.

All components of this bowl can be made in advance, making it the perfect meal to take for lunch! Just be sure to stir the broccoli pesto into the quinoa right before eating as I find the flavours dull quickly once mixed. 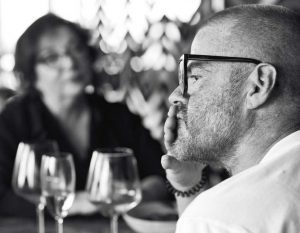