EWAN SARGENT on the perils, pitfalls and sheer pleasure of dining out.

I went to a fish restaurant once and the waitress said, “Don’t bother asking me what’s good because I hate fish.” She didn’t drink either because she couldn’t stand alcohol. Having got that off her chest, this remarkable free spirit cheerfully asked what we’d like to eat and drink.

My heart sank. Not at having to navigate the menu without her, but because I was in a fish restaurant that employed staff who disliked fish and happily told customers that. It was a really big hint that all was not right.

We look for clues when we go to a new restaurant as to whether we are going to be dazzled or duped. I guess you can regard this Cuisine issue as a kind of cheat sheet. Pick one of the restaurants mentioned here and a good time is as guaranteed as you can get.
But much of the time we swim in uncharted waters. Our usual guidance is something like someone at work who says their cousin’s aunt went to Milly Jilly on Queen Street and said, “It was seriously good.”

Forget the anonymous online reviews. There will be the usual mix of five-star ratings from relatives of the staff, a four-star rating from Queenslandboi105 who “lurved the garlic loaf, it was to dye for”, three stars from a VIP reviewer who pens 1000 pompous words about himself, and one-star ‘don’t go there’ reviews posted by staff from the opposition restaurant down the road.
So you are on your own.

Going to new restaurants is like playing the pokies. You lose often, but win just enough to get hooked on the thrill of being able to whisper, “It was seriously good” to others. You never know for certain how it is going to go until you’ve tried all the courses – and I’ve seen amazing recoveries among desserts. Menu-writing is a mysterious art and often they say a lot about very little. Sometimes a whole excited sentence will describe a meaningless yellow blob about the size of a thumbnail.

Another bad sign is when you arrive and give your name, they check the booking, put a pencil line through your name … and it’s the only name in the book. There’s no feeling quite like it when there are no other diners, the chef even peeks his head through the door to see who has come, and you are taken inevitably to the window seat.

Sauces are another big clue. When the aioli tastes of thin, creamy nothing, you can bet that nothing else will be much good either. Sauce intensity is in direct positive correlation to the meal’s yumminess. Yet another ‘uh oh’ comes when you spot the same Milly Jilly house apple slaw appearing with the Texas pulled pork, the Thai fishcakes and inside the sliders. One slaw to rule them all is not a magic night out; every dish should be its own story.

The staff’s engagement and knowledge indicates the quality of what is coming. Inexperienced and out-of-their-depth staff don’t generally go with magic-moment restaurants. I’m thinking of one young woman who backed herself with the wine list by telling me she thought, “A white wine might go well with the dish,” but covered herself by saying, “A red wine would be fine too.” And there’s my all-time favourite guy who, when I asked about the beef cheeks, said, “Huh, don’t ask me, I’m not the chef.”

Maybe the saddest experience was the young woman who said she would love to try the dish I was ordering. I said I thought she got to taste it, so that she could tell diners what it was like. “Wow, it would be great to work in a place like that,” she said. Lots of hints there.

Some say it’s best to wait a few months until a new place beds in before you try it. I say go there early while the new chef has the power and they still have all the expensive ingredients that make the accountants flinch. Wait six months and you will be ordering mac ’n’ cheese croquettes.

If all this seems too negative and harsh, I don’t mean it to be. The chances of you finding a great restaurant are much higher these days because the passion and skills are so much higher among those restaurants that care. They are in a race to the top against each other, our TV-fuelled expectations and our rising home-cooking skills.

Well-meaning and hopeful, or tried and true, is no longer good enough. Owners and chefs who are hands-on and driven and know that nailing the small stuff creates the amazing big stuff seem the best bet for producing those truly compelling dishes.
You know, those dishes that make your eyes widen in appreciation, then half close again in pleasure. Your jaded taste buds shout “OMG”. And you whisper, “This is seriously good.”

Heading over to London any time soon? Get to Coldharbour Lane in Brixton to Melanie Brown’s new all-day restaurant and bar, The Laundry. Brown is wellknown in the area for her great work at The New Zealand Wine Cellar.

Did you know that when exposed to sunlight, mushrooms are the only vegetable that produce vitamin D?

Alpha Domus winery in Hawke’s Bay has reached a significant birthday, notching up 30 years in the industry.

Gin and sunshine are just made for each other, so welcome Te Rā from Puhoi Organic distillery. An apple and saffron-infused gin, it’s made using the power of the sun becoming NZ’s first solar-powered gin. 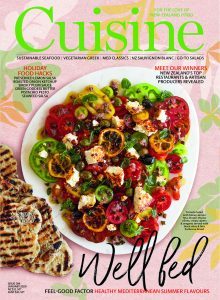 Festival returns  to Christchurch where a range of local food and drink come with a side dish of theatrical surprises, including The Feast of Fools, billed as Heston Blumenthal meets

Festival returns  to Christchurch where a range of local food and drink come with a side dish of theatrical surprises, including The Feast of Fools, billed as Heston Blumenthal meets Carnival of Venice.

Festival returns to Christchurch where a range of local food and drink come with a side dish of theatrical surprises, including The Feast of Fools, billed as Heston Blumenthal meets

Festival returns to Christchurch where a range of local food and drink come with a side dish of theatrical surprises, including The Feast of Fools, billed as Heston Blumenthal meets Carnival of Venice