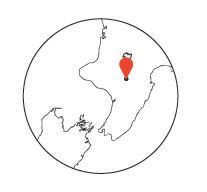 IT WAS WHILE travelling through South America that Dan and Jacqui Cottrell first started to tinker with the idea of growing quinoa in New Zealand. The Cottrells had noticed that the areas where quinoa grew had a similar climate and scenery to the central plateau region where Dan’s family farmed near Moawhango, northeast of Taihape. They were curious about its viability and place on the beef, sheep and wool farm.

Quinoa (pronounced keen wah) is native to South America and is a seed crop, but as a pseudo cereal it is grown annually like a grain. It’s from the same family as spinach, silverbeet and beetroots. High in protein, it contains all nine amino acids which means it’s often referred to as a complete protein source, making it ideal for those on a plant-based diet. The fact that it is gluten free, too, has seen demand growing worldwide. Dan and Jacqui wanted to bring something different to the farm that would add another level of income and diversity without risking the current income streams. Quinoa made sense. It had a short growing season, grew at high altitude and liked cool weather. It needed dry periods for seed maturation and harvesting. These growing conditions were similar to those on their farm. An agronomist, Jacqui had long had an interest in health and whole foods, especially those grown with minimal intervention. She knew quinoa was popular but wondered why no one else was growing it in New Zealand.

“We suspected it was because of saponin, a bitter phytochemical that prevents it being eaten by bugs and birds and which has to be removed before humans can consume it. I think that level of extra processing was maybe slowing down people in New Zealand from taking it on, making it work.” 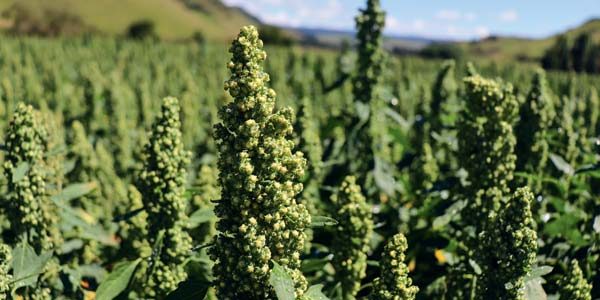 After a few trials, they chose a variety that was suited to the land and had the advantage of being low in saponin. It had the shortest growing season, suited a mid-October planting and needed low rainfall before harvest at the end of summer. It fitted well into the cycle of the farm as it didn’t interfere with busy times around beef, sheep or wool production, although as Jacqui wryly notes it does mean no summer holidays.

In 2015-16, the first year of harvest, they produced 1½ tonnes, which gave them more than enough for seed multiplication; the rest they sold to speciality food store, Sabato. Last year they produced 70 tonnes and the yields are still improving. Long term they are looking towards export, mostly to Asia which is where most of the interest is. They have just sent a first shipment to an importer in Japan who is keen to showcase the Kiwi product in the lead up to the Rugby World Cup.

As Jacqui says, “It’s intact as whole grain, it’s got that lovely outer layer so it retains its integrity really well. Lots of imported quinoa can turn like porridge if you overcook it. I cook ours quite differently, I give it heaps of water which seems the most fail-proof way of cooking it and strain off the excess at the end. It doesn’t need to be steamed at the end to fluff it up. It does take a little longer to cook; around 20 minutes rather than the recommended 15 minutes for most other quinoa.”

Jacqui recommends rinsing the quinoa and cooking with a ratio of 5 cups water to 1 cup of quinoa, cooking for 20 minutes, before draining well. You can tell it is cooked when the seed opens up, releasing little white tails. As a rough rule 1 cup of raw quinoa will equal just over 3 cups of cooked quinoa.

Roast chunks of 1 medium orange sweet potato and 3 zucchini in a hot oven until tender, approximately 30 minutes. Cook ⅓ cup of quinoa in boiling salted water for 20 minutes, drain and dress with half the dressing made from the zest and juice 1 lemon, 2 teaspoons wholegrain mustard, ⅓ cup extra virgin olive oil. Add the roasted vegetables when finished cooking, along with plenty of chopped parsley. Season to taste adding extra dressing if required. Scatter with toasted flaked almonds to serve.