MARTIN BOSLEY CONTINUES OUR SERIES WITH HIS FAVOURITE DISH FROM ANOTHER NOTABLE NEW ZEALAND RESTAURANT.

Char kway teow is a dish with soul, deeply rooted in the stories of fishermen and farmers, who would supplement their income by peddling the dish to nearby workers. My fascination with this tantalisingly tasty dish began several years ago at Wellington’s Little Penang, the thriving Malaysian restaurant tucked away on Dixon Street, run by Tee Chiew Phie and her husband Keith. I order it and hunch over the plate in silence like an old French gastronome with his ortolan, saying nothing, slurping, crunching and sweating until the plate is clean. There isn’t time to tell you about the glass of iced coffee with condensed milk that accompanies it. 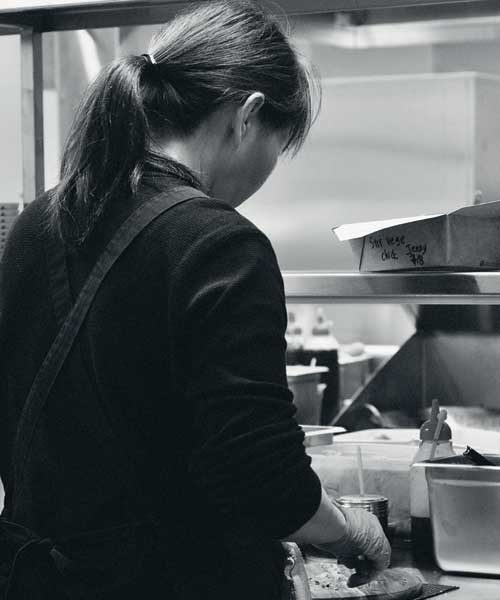 Char kway teow literally means ‘fried flat noodles’ and that’s about the only common denominator in char kway teow recipes. All the other ingredients are a glorious tribute to the mixing of the many, including bean sprouts, eggs, onion, Chinese sausage, chilli, pork lard, pork crackling, Chinese chives and chilli paste. Hawkers on New Siam Road include prawns. Tee adds a perfect ratio of two secret sauces to her recipe, but at its core, a good char kway teow is judged by its ‘wok hei’, or ‘breath of the wok’. It’s a slightly sweet, charred taste, brought about by cooking the right sized portion at the right temperature, the sauces poured around the wok so they drip into the noodles. It is the sum of all its influences – Chinese, Thai, Indian and a few others besides. Yet it is also itself, an utterly unique flavour that emerges from what could be dismissed as a fearful cacophony of ingredients.

Back in Penang, Tee used to be the country head of business banking for a large corporation and Keith was involved with the stock market. Tired of corporate life, they moved to New Zealand with their children. Tee began volunteering at Wellington’s City Mission, making her favourite soups. Gradually she became more adventurous, adding curries and rice dishes to her repertoire. Word got out and more and more people would turn up on the days she was cooking. Encouraged, she opened a small takeaway on Dixon Street eight years ago. Soon, the takeaway expanded into the space next door and became a restaurant. In 2017, a second restaurant opened on The Terrace. Tee still believes that cooking for the community is important and continues to give back through a church ministry outreach program.

Those secret sauces she adds to her char kway teow? Tee imports her own ingredients, including Camel brand soy sauce, anchovies and ginger flower. Recently, the mee goreng was off the menu because the shipment containing the sauce was delayed. Tee would rather maintain the integrity and heritage of the dish than use a substitute. It’s part of a wider philosophy that Tee teaches her staff; treat the customers how you would treat your family and cook as if you were cooking for your father or mother. Not a bad rule for life, really.