“BOLD & GENUINE, REFINED BUT REBELLIOUS” IS HOW KYLE STREET SUMS UP AUCKLAND RESTAURANT, CULPRIT. TRACY WHITMEY SORTS THROUGH THE CONTRASTS.

Slashed with neon, the crisp whitewashed brickwork and open kitchen of Auckland’s Culprit restaurant don’t immediately shout of nostalgia, yet that’s the first word that co-owner Kyle Street uses to sum up the guts of the place. But banish any ideas of nostalgia in the way of stuffy, formal service and predictable, old-fashioned food. Instead when he says, “With our trolley service we’ve taken the best of dégustation, but stripped away the pretension,” you start to get an idea of how Kyle and co-owner Jordan MacDonald have tossed together tradition with razor-sharp technique and a healthy slug of irreverence, offering a fun way of eating to Culprit’s keen diners.

‘European yum cha’ is shorthand for loaded trolleys and trays circling the dining room, delivering eight or nine individual bites and tastes each celebrating a hero ingredient. Diners pick and choose from these taste intros, then launch into larger plates to share.

The ethos of celebrating unloved vegetables and secondary cuts of meat shines bright in dishes of pig face, beef brisket and ‘ugly carrot’. “It’s not just a gimmick,” says Kyle, “it’s about flavour.” Changing diners’ perceptions can be a big ask and he recognises that people may have a preconception of dishes such as offal, based on previous bad experiences. “These are big flavours and can be confrontational, so they need to be reined in and treated properly. The ingredients may seem risky or scary, so we have to be confident and bold in the kitchen.”

And here the funky, pastel-popped trolleys play a part, an informal yet intimate way of serving, showing the dish to diners before they choose, and taking away that element of self-editing, whereby we know what we like and stick with what we know. Why not take a chance on something new or unknown – say salmon belly, fermented  mushrooms, mini Buerre Bosc pears or whipped bone marrow – when it’s bite-sized and modestly priced? “And,” says Kyle, “it’s how chefs eat when we get together. We want to have the best experience and get the most off the menu.”

Kyle and Jordan first picked up the idea of trolley service from State Bird Provisions in San Francisco, during a long research trip across the US. Ready to strike out on their own after a spell working together at Depot and Federal St Deli, a road trip was the chance to eat heaps of food, see what ideas they came up with and get caught up in lots of romantic schemes. (“We got that from Al [Brown],” says Kyle, “He’s a massive visionary.”) They returned brimming over with concepts and things to try: too many and too varied it turned out for just one restaurant. So, first Culprit was launched, followed by Lowbrow, a short order-style eatery proudly parading its American influences. For now, Kyle is in charge at Culprit, with Jordan running two branches of Lowbrow; although very different in execution, both restaurants share an underlying vibe. “We’re just being ourselves, not super-pretentious. We’re very serious about what we do, but we don’t take ourselves too seriously.” A new bar, Little Culprit, is all set to open, just across Wyndham Street from its big brother.

Kyle believes every restaurant should have a soul, a reason why, and this should then inform every decision about the place. For Culprit it was the trolley service (so, for instance, each table is an exact trolley width from the next, allowing the carts to slide smoothly into place). “Right from the start we had a strong picture in our minds of trolleys loaded up with lots of different dishes. But when we first opened we had a huge learning curve and we were very naive. That type of service is very challenging for the chefs; it’s definitely a harder way of doing it.” However, it became apparent that there were logistical problems to overcome; with 14 trolley dishes initially offered and three sittings a night, how do you keep the food fast and fresh while trying to serve a restaurant full of people at the same time? How does the kitchen keep track of the myriad permutations of all those trolley dishes, a handful of other entrées and a menuful of mains? The experience had become anything but the approachable, relaxed encounter that was meant to be Culprit’s raison d’être.

So, after a year, Kyle and Jordan took a frank reappraisal of how they were doing things. “Even though it was that picture in our minds of the loaded trolleys that had driven us every step, even though it was so fundamental to what we wanted to do, it was that picture that held us back. Once we threw away that image we could open up and see the issues.” Paring back the trolley service to a more manageable eight or nine dishes, and taking bookings every half hour streamlined the kitchen processes and meant that they could focus on the customer experience.

It was a humble green bean that first opened up Kyle’s tastebuds to the possibility that food could wow. Working as a dishwasher his interest was piqued by the kitchen  environment, the camaraderie and the competitive, almost team-sport way of working. There he saw a space where he might be comfortable, somewhere he could be successful. He saw a place for people like him, quirky and a bit left of centre. But it was the scene that appealed rather than any inherent love of food. “When I was young my relationship with food was very limited, very small minded. When I saw that green bean being blanched, cooked in butter and seasoned, when I tasted that green bean I thought, ‘Why have you been so sheltered?’ After that, food wasn’t shut off to me any more. At Culprit I want to recreate that chance for mind opening and share with customers that feeling I experienced.”

For Cuisine, Kyle has devised this luxurious but witty jelly dessert which pretty much sums up what he’s about. With throwbacks to his nanny’s trays of Christmas jelly at the bach, it has nostalgia in spades, a ton of fun, sophisticated flavours and a hint of the subversive. Who said jelly wasn’t for grown-ups? 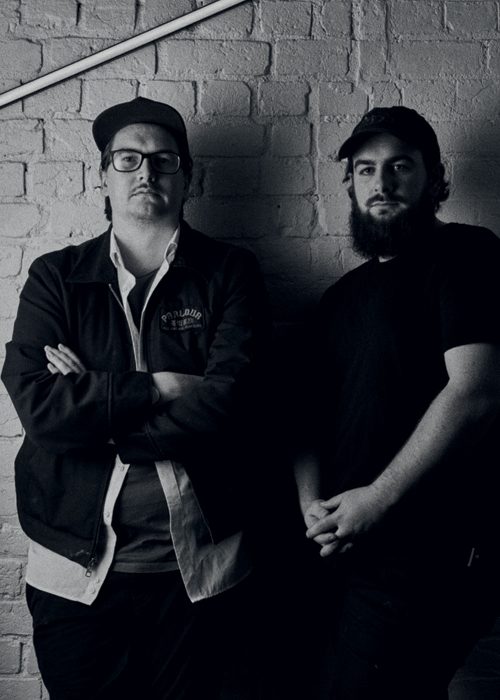